How to play Roulette - is it really a game of luck or human factor matters?

Roulette (or rulet) seems to be the most popular of gambling games nowadays and as it often happens, the invention of this great play was not premeditated. It came to pass that initially a roulette wheel was designed to be a perpetual motion machine. The inventor of the construction, Blaise Pascal, unfortunately did not achieve his goal but granted humanity with an immense entertainment.

What is the process of play 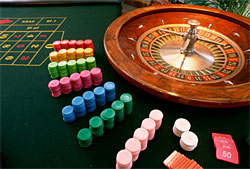 The main sense of this game of luck lies in the fact that players place their bets on numbers and their combinations, black and red colours, odd and even positions. There is a huge amount of stakes that you can freely choose and each of them has its own characteristics, probabilities and payoffs. Thus, it is strongly recommended to learn roulette rules before getting down to business. In order to define a winning number, a dealer or croupier turns a wheel (which also could be designed in several ways in European and American versions) in one direction and spins a little plastic or ivory ball in the opposite way. It is the time when players stops betting and only chance rules the destinies. The ball is gradually decelerating and randomly lands in one of the pockets on roulette wheel. There are 37 slots in European roulette variation of the game and 38 slots in American roulette. Players who were lucky (or smart enough) to bet on this position are the winners and could get their payouts.

Actually, the main thing players should do is to make bets correctly and they really have heaps of alternativesto choose among. Let us to describe briefly the possibilities you can adopt playing roulette.

There are two main methods of making bets during the game. The first one is called inside betting. To put it simply, players make stakes on different number combinations. Logically, the payoffs depend on how many numbers are included in a bet combination: the more numbers you choose to stake on, the larger probability of your winning is and, consequently, the lower payout you could get.

The second method, outside betting, assumes that players make bets on colour (red or black), low or high number, odd or even number. Outside betting also provides two bets that are based on number combinations named dozen and column bets. The latter type of bets is usually considered as less risky and involves lower payoffs.

Another important thing you should always remember is that in any case casino is designed in such way that it always keeps a winning advantage over the players. There is a difference between the true payoffs and payoffs that players get in reality. This difference is called a roulette house edge and could cut your expected winnings significantly. And it is strongly recommended to play European version of the game as it provides less house edge than American one.

To sum up, the process looks rather simple and one could consider that there is almost no human factor involved in roulette game. Of course, it is commonly agreed that roulette is a game of luck; indeed, it is a gambler who works out a playing strategy and decides which bet to make according to his/her theory. Moreover, only gambler is the one who chooses when to stop playing which could be rather hard decision.