Roulette history and vicarious learning: do not repeat past mistakes 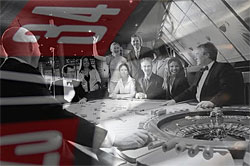 The term 'roulette' originates as a French word meaning 'a little wheel'. There are a lot of different and even contradictable opinions concerning the place of origination of the game but the most commonly agreed is a theory which states that the first roulette wheel was invented in 18th century in France. Initially this device was constructed as a perpetual motion machine and was designed by a famous French scientist and inventor Blaise Pascal.

It is also said that roulette game comprises features of the English game Roly-Poly, Ace of Hearts, Reiner and the Italian board games named Biribi and Hoca.

Paris - a cradle for roulette game

It could sound a little bit strange but firstly roulette was exploited in a monastery in Paris. In any case, it went by not so much time while roulette spread to the huge amount of French casinos. The first mention about the game appeared in the novel La Roulette, ou le Jour by French writer JaquesLablee where he described a roulette wheel in French palace Palais Royal in 1796. This narrative included even allusions about the two green slots designed for a single zero and a double zero positions. Furthermore, JaquesLableeseems to be a really clever guy as he even managed to explain that these additional pockets provided casino with an extra advantage over the players. There is also even former mention about roulette in the 'Regulations for New France' which prohibited such games as dice, hoca and roulette.

In 1843 in Germany a single zero wheel was firstly introduced by the Frenchmen FranÃ§ois and Louis Blanc. In such way they wanted to beat other casinos offering a game with less roulette house edge.

In 1886 a lot of different modifications of roulette game were described in the Hoyle gambling papers introducing us the following details: previously there were only 28 numbers on the wheel, two slots for zero positions and even an American Eagle pocket. A little bit later a slot with a symbol of American liberty disappeared.

Approximately in 1800s roulette began to conquer the territory of Europe and USA gradually getting more and more inveterate admirers.

In 1860s the German political administration banned gambling and all Blanca family decided to move to Monte Carlo where the last legal casino successfully operated. As we could observe nowadays they did not make a mistake with a location choice launching in Monte Carlo a paradise for gamblers. At those times a type of roulette that now is called European roulette almost excluded a double zero game from European casinos and the latter roulette variation went forward at a steady gait only in USA. In 1970s roulette game became prevalent and familiar for every more of less reckless player. Nowadays you can judge about the popularity of roulette game from the famous phrase that exactly roulette is aking of casino games.