All about roulette wheel: variations and how they affect?

In fact, it is rather strange from semantic point of view to use a phrase "roulette wheel" considering that the word "roulette" is translated as "little wheel" in French. Anyway, we are not going to break the established traditionby renaming one of the most important elements of roulette game but we will take a closer look at the wheel itself. 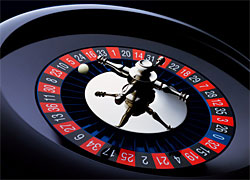 Usually, roulette wheelsare made of 32 inches-sized bowlswith movable central segments that spin and actually define whether you win or lose.Conditional on the game variation the wheel could have 37 slots (numbered 1 through 36 and 0) in European rouletteor 38 slots (the same as in European roulette plus 00 slot) in American roulettegame. In some earlier forms of American roulette wheels there was an additional pocket named an American Eagle. Despite that it was a nice symbol of American liberty and what is even more important - it gave the casino superfluous edge, - the extra slot disappeared during the evolution of roulette game.

Modern roulette wheel design seems to have some rules that have been elaborated for years.All the numbers on the wheel should be equally coloured red or black and only the single and the double zero slots are green. The numbersare distributed in such way that the balance between colours, high and low, odd and even numbers remains. Moreover, black and red slots, groups of even and odd numbers should interchange. Normally, the roulette wheel is constructed so thatnumbers face the outside of it.

In European roulettethere are three traditional wheel designs which differ with arcs on both sides of zero slot:

In American rouletteversion of the game there are some additional rules of pockets' placement:

Also, it is a common practice to place two odd numbers in turns with two even ones.

After players make the roulette bets the croupier turns the wheel anticlockwise and spins a plastic/ivoryball in the exact opposite direction to the roulette wheel spin. In order to guarantee that the ball is fallen to home pocket randomly there is a number of small barriers (knobs and bumps) on the wheel. Little by little the ball is losing its speed and gradually reaches the head of the wheel where it strikes the panels that divide different pockets. Finally it falls into one of the slots and croupier announces the winning numberand its colour,which means that the player who made bet on it is a winner.