All about roulette table layout: interpretation of its design

As a matter of fact, under the term "roulette table" isusually meant table layout which is acloth that covers betting area on the table itself. It has a rectangular shape and extends from the roulette wheel on one side to the column bets on the other one, thereby separating the territory between players and dealers.

Usual roulette table has 18 red, 18 black and 1 (European roulette) or 2 (American roulette) green numbers. The first 36 numbers are split up into 3 rows stretching along the whole layout while zero position(s) are placed at the top of these rows, more precisely - right above the numbers 1, 2 and 3. All the described area presents the possibilities for making inside bets. 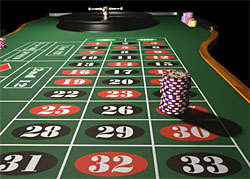 In order to make an outside bet players should use differently marked area which is located outside the layout. Here, you can choose to bet on numbers characteristics (different blocks, colour, odd or even, e.g.) or opposed the number itself. Particularly, players could bet on the first (1-12), second (13-24) or third (25-36) group of the numbers; or just make bets on the first (1-18) and second (19-36) blocks of the slots. You also have an additional opportunity to stake on the one of three columns instead of numbers; thereby all these supplementary options allow to involve less risk. Regarding all the above mentioned, it is not surprisingly that betting outside is considered as more conservative way of gambling

Although American and European table layouts are very similar but the differences still exist.

There is a roulette wheel above the table layout which contains the same set of numbers as the layout does. After the wheel starts its rotation and the ball is thrown, dealer keeps his/her hands over the layout and shows that nobody is allowed to make bets anymore. The only thing that is left to do - wait and hope that you will win.

It is worth to mention that sometimes the roulette layout could also contain the electronic score sign which traces the up-to-the minute game results. It is normally placed on the eye level near the roulette wheel. One can regard this device superfluous, but experienced players know wellthat table trends are very important for successful gambling.